Hi...
It's been a few day's I guess.
Sorry I didn't reply right away, I sort of reverted back to my bubble.
That and I had to deal with mountains of people and police and nurses.
Because we had to find out what's wrong and what happened.
But..nothing.
There is no trace that anyone other than me was in my apartment that night. There is no damage to my body (I also did a rape kit, a drug test, blood test..) and nothing that could explain my blackouts.
Also the video
yeahireadoverthepostsandwatchedthevideo..
It looks like it was taken on my webcam, and it IS me.. it looks like me. But I don't remember making it, I don't have the movie file anywhere on my computer as far as I know (I've been checking but NOTHING)
So, basically what the evidence is saying is, I blacked out, made a fucked up video, then said fuck my warm home I'm going to a creepy cold dock outside the cemetery!
But what everyone else in town thinks is I'm a victim in some kind of perverted attack.
Oh, and of course because I live in a small town, and everyone within the peninsula area knows my family, every town within 50 miles knows about it.
I haven't left the apartment much because of this. I tried going out for a drink and that proved...
A stupid idea.
Also.
My green lighter is missing, and my purple one is full of fluid, but won't work.
And I was going through my binder looking at a bunch of my old work and seeing what I wanted to throw out, when I came across this. 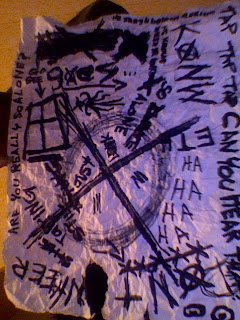 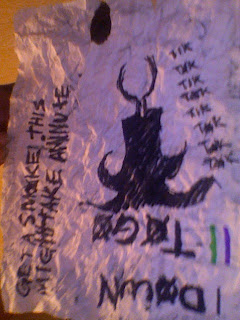 And the back says
"GET A SMOKE . THIS MIGHT TAKE A MINUTE" "| DOWN || TO GO" " TIK TIK TIK TOK TIK TOK TOK TOK"
Then there's all these drawings.
I have no clue if I made it or not...
It's all just over my head right now I don't even know what to think.
...
AT least who ever wrote it was thinking about my sanity.
Yes crazy paper, I will have a smoke.
++~HART
Posted by 0harts at 10:42 AM

0harts
Tired and quiet. I seem to only talk to myself now.